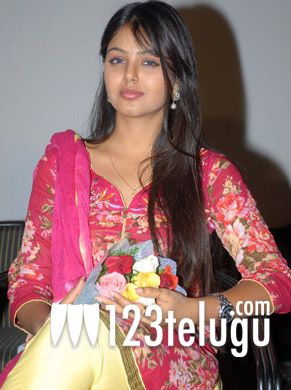 Monal Gajarr, who is riding high with the success of her latest hit Sudigaadu is now getting ready for her second release Vennela 1 1/2. We caught up with this lovely actress for an exclusive interview. This is what she had to say.

1. How are you enjoying Sudigaadu’s success?

Ans: I am so happy and thrilled to bits. The movie is in its fourth week and still going strong. I am very happy that all my hard work has finally paid off.

2. Are you nervous about your second release?

Ans: I am not at all nervous about the film. I know we have made a very good film, and the audience would surely appreciate us. It would be a sure shot hit.

Ans: I play the role of a young girl who takes the help of a Love Guru to find out more details about her fiancee.

4. How was it working with Vennela Kishore?

Ans: It was like a picnic. We had so much fun on the sets. He is not only a good actor himself, but a very encouraging director. He is always open to suggestions and never says no to any important inputs form others.

5. How are you managing with your Telugu?

Ans: Initially it was a bit difficult, but with the help of my Ad’s and other assistants my life was made easier.

6. You have already signed five films even before your first release, how did you manage that?

Ans: Touch wood I have been very lucky in that matter. The first film I signed was Vennela 1 1/2, but Sudigaadu released first. Since Vennela 1 1/2 got delayed i had a chance to work for two films in Tamil.

7. Tell us something about your upcoming movies?

Ans: My next Telugu release would be ‘Oka College Story’ and I also have some interesting offers in hand. I will announce them as they shape up.

8. What kind of roles are you looking forward to play in the future?

Ans: Something which is female oriented and have good scope for me to perform. I would love to play roles similar to that of Vidya Balan in Khahaani and Anushka in Arundhati.

Ans: Though i have done a special apperence in Asha Bhonsle’s upcoming movie, I am totally concentrating on my career in the South right now.