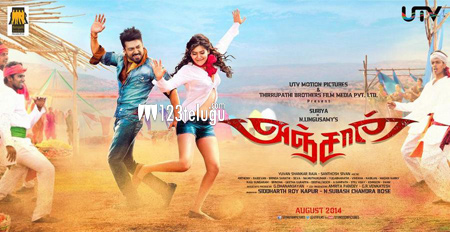 Suriya’s Anjaan in tamil will be dubbed into telugu as Sikandar. Lingusamy is directi​n​g this film​ which isone of the most anticipated films in the career of Suriya.

The posters of this film are all over social media and Suriya’s bearded look has scored well with the audience. Today is apparently the last day of shooting for this movie. This movie is produced by Thirupathi Brothers and UTV.

“Last day shooting of #Anjaan today at Vasai fort, near Mumbai. With this the film is getting wrapped up & gearing up for release on 15th Aug”, tweeted G Dhananjayan of UTV.

Manoj Bajpai will also be seen in this film
​​
and Yuvan Shankar Raja is scoring the music for this film. The telugu rights for this film have been bought for a bomb.