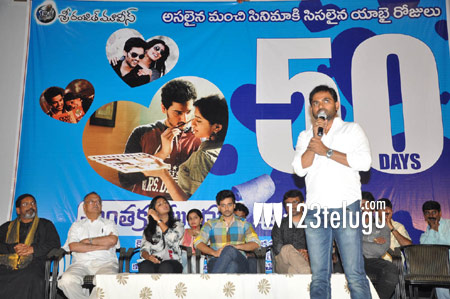 The romantic family entertainer ‘Anthaku Mundhu Aa Taruvatha” has crossed the 50 days landmark. The movie has received very good critical acclaim and it has managed to pull in good revenues at the Box Office. To celebrate this, producer Damu arranged a 50 days function today. The entire cast and crew attended the event, which was held at Prasad Labs

Producer Damu thanked the viewers for appreciating a good movie. He also had words of praise for director Indraganti Mohana Krishna and for the lead actors of his movie. AMAT deals with the dynamics of personal relationships before and after marriage.