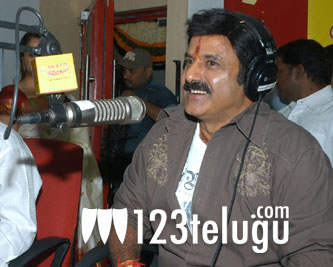 Participating in a radio talk show, Sri Rama Rajyam hero Nandamuri Balakrishna predicted that the time is now ripe for Tollywood production houses to resume making mythologicals. He revealed that two years ago he had started work on Narthanasala but had to shelve it midway due to date issues. The actor said that he was pleasantly surprised when two leading producers came forward to resume work on and complete the movie.

He said among the mythologicals his father had acted in, “Sri Krishna Pandaveeyam” and Seetharama Kalyanam were subjects that are very close to his heart. Regarding Sri Rama Rajyam Balayya said that only Bapu could visualise such extravagant beauty in every frame on a screen. The movie is slated for a November 17 release.

He also had special words of praise for Ilayaraja’s melodious background score and said that it matched with the mood of the film.