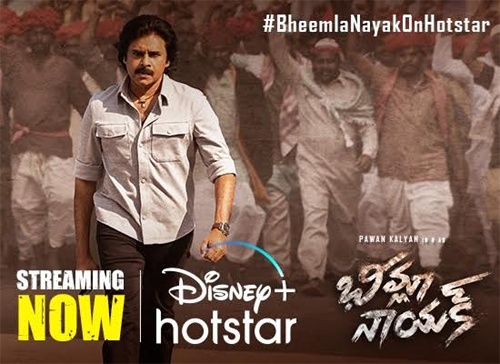 The Power Star’s Power-storm has hit Disney Plus Hotstar and is going strong. Pawan Kalyan’s massive stardom has once again been established with the Tollywood film winning so many hearts. The sensational story and heavy dialogues have already become a household favourite.

In the battle between pride and self respect, two flawed men get embroiled, exuding their masculinity throughout. The film’s story bears witness to the age old saying – “If a man’s ego is hurt, it becomes his vital weapon.”

Disney Plus Hotstar really hit it out of the park this time with Bheemla Nayak. With the film’s World Television Premiere, Disney Plus Hotstar has successfully created a celebratory atmosphere in the minds of the Telugu spectators, especially the star’s fans.

Rana Daggubati’s debut with Power Star Pawan Kalyan is another highlight of Trivikram’s “Beemla Nayak”. Starring Nithya Menon and Samyukta Menon as the female leads, the film transports the audience into a universe of its own, ruled by the power star himself.

The dialogue-heavy movie has managed to bring out the charisma out of the Power Star. The film’s music and the background score adds to the aura that Pawan Kalyan oozes and has made it into a sensational experience.

To know what happens to the two macho men, watch the movie “Bheemla Nayak” on Disney Plus Hotstar.