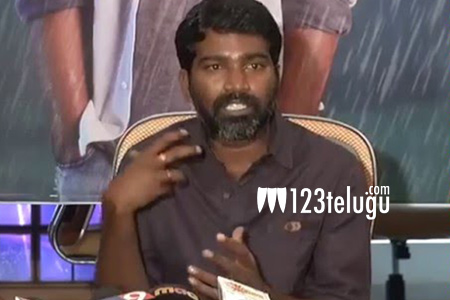 The trailers of Nenu Sailaja have caught on really well, and one man needs to be credited for this and it is the director Kishore Tirumala. On the eve of the film’s release, we caught up with him for a brief interview. Here is the transcript.

Q)Your last film Second hand was a failure. How did you bag this project ?

After the debacle of Second Hand, I took a break and during this time I wrote the story of Nenu Sailaja which was based on a real life incident. I narrated it to Sravanthi Ravi Kishore who liked it immensely and decided to make it with Ram.

Q)What is Nenu Sailaja all about ?

Nenu Sailaja is a cute love story with some intense emotions. The film moves around three characters that is the hero, heroine and her father. It will showcase why the youngsters today are not able to express their love towards each other properly.

Q)How different will Nenu Sailaja be from Ram’s previous films ?

Ram plays a DJ in this film and has completely surrounded to me in terms of his performance. The way his character has been showcased is quite new and simple from his previous films.

Q)What made you choose Keerthi Suresh ?

After finishing the script, the entire unit felt that a new face will suit this role completely. So we decided on Keerthi and she has done a fabulous job in the film.

The entire concentration is on this film and once it releases I have a few scripts ready which I will narrate to a few actors.