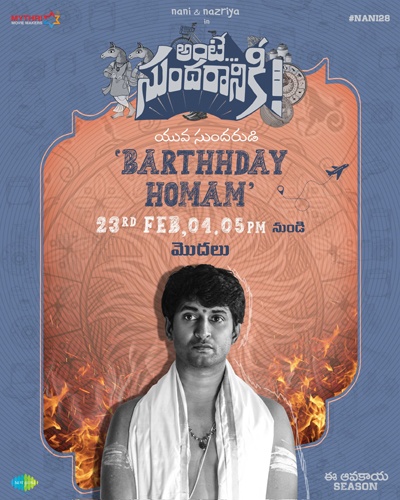 As the protagonist Nani will turn one year older on February 24, the makers have planned to surprise his fans with something special. The makers have released a funny poster to reveal that ‘Sundar Barthhday Blast’ will be announced tomorrow at 04:05 PM. The creative promotion has mesmerised the audiences and made them wait for what the team has to unveil tomorrow.

Written and directed by Vivek Athreya, well known for Mental Madhilo and Brochevarevarura, the movie is bankrolled by the prestigious production house, Mythri Movie Makers. Vivek Sagar has scored the music for this rom-com movie.

Having Nadia, Harsha Vardhan, Suhas and Rahul Ramakrishna in key roles, the movie has recently completed its shoot and is getting ready for a grand release in theatres only.