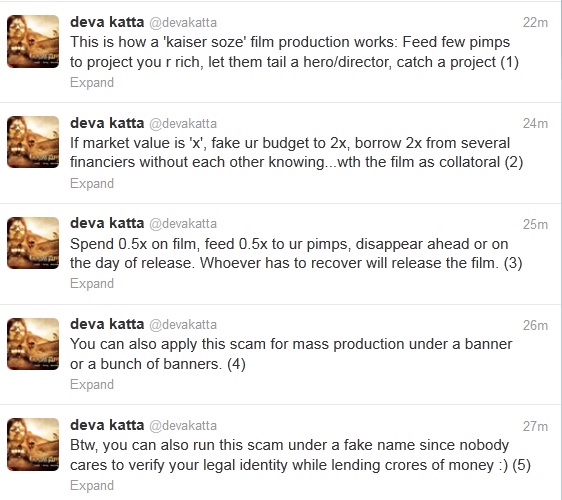 Director Deva Katta is on fire. The man made some sensational and shocking comments through his twitter account today and we are presenting them here for you to see. He posted about 5- 6 tweets today and here they are –

” This is how a ‘kaiser soze’ film production works: Feed few pimps to project you r rich, let them tail a hero/director, catch a project (1)

If market value is ‘x’, fake ur budget to 2x, borrow 2x from several financiers without each other knowing…wth the film as collatoral (2)

Spend 0.5x on film, feed 0.5x to ur pimps, disappear ahead or on the day of release. Whoever has to recover will release the film. (3)

You can also apply this scam for mass production under a banner or a bunch of banners. (4)

Btw, you can also run this scam under a fake name since nobody cares to verify your legal identity while lending crores of money 🙂 (5)

Deva Katta’s film ‘Autonagar Surya’ with Naga Chaitanya has been delayed for quite a while now. The various issues surrounding R.R.Movie Makers banner are said to be the main reasons behind this inordinate delay. While Deva Katta has not officially named anyone in his tweets, the target of his frustration seems a little too obvious…