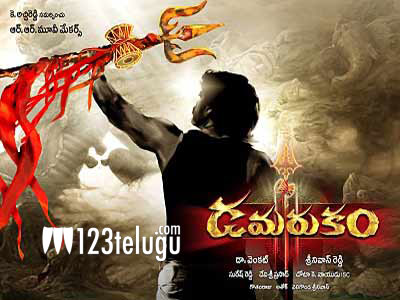 Princeton, NJ: Sep 21, 2012: Vyshnavi Films, USA is entering into the overseas distribution and is proud to announce that they have acquired the overseas theatrical rights of Nagarjuna’s magnum opus“Dhamarukam”. The film has South Indian princess Anushka opposite Nagarjuna which will be a treat for andhrites after their successful Super, Don & Ragada. Dhamarukam is coming from the top production house RR Movie Makers headed by Dr. Venkat garu . The movie is all set to release all over the world on Oct 11th 2012 as Dasara special. The movie is coming up as one of the land mark movie in tollywood’s history and a clean entertainer in the lines of Ammoru, Arundhathi, Magadheera etc.

The highlights of the movie DHAMARUKAM are:

#DHAMARUKAM is the Costliest movie in the career of Nagarjuna and Anushka.

# DHAMARUKAM is the best graphical feast in the lines of Ammoru, Arundhathi & Magadheera .

# DHAMARUKAM is directed by Mr. Sreenivasa Reddy who is known for making fantasy films with comedy touch.

# DHAMARUKAM has another important character is Hasya Brahma & Padmasree Brahmanandam in full length comedy character who have extensively worked for more than for this movie.

# DHAMARUKAM graphics work alone took more than 9 months to get the visual feast for the audience.

# The industry inside reports says that the scenes involved Nagarjuna, Anushka and Brahmanandam in DHAMARUKAM are going to be the best in their career for years to come.

# DHAMARUKAM Music is provided by the number one music director of South India Devisree Prasad, and all the songs are instant chart busters all over the world. The movie is Devisree’s 50th movie.

For info Vaishnavi Films is putting all the efforts to release all over world with premiere shows in the best available screens, so that the movie lovers can get the best feel out of these type of graphical extravaganza.

We thank Mr. Venkat garu for extending his support and providing us this opportunity.

To be a part of this venture in your City / Country, Please contact at following numbers