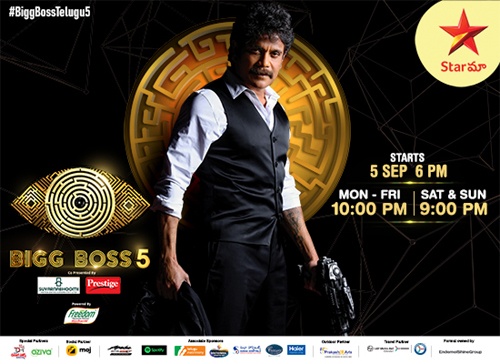 Mark your calendars and set your reminders for September 5th, 2021. Pace yourselves because coming to your screens is one of the biggest events of Telugu Entertainment.

The latest season of Bigg Boss, the show that has become a common name in all of the Telugu households, is being launched on the 5th of September on Star Maa. So crank up all your excitement and wait for the big day because festivities are going to be a part of every house for the next 100 days.

Bigg Boss has become one of the most celebrated shows among the Telugu audience and the past four seasons were so successful that they compelled millions of families to sit together in their living room enjoying the show for more than three straight months. Packed with diverse emotions, subtle drama, thrill, excitement, and lots of laughs, Bigg Boss had introduced a new class of entertainment for the audience.

The way the host, King Nagarjuna had tackled the various mindsets that are a part of the show made the show even more entertaining for us. And it is expected to be the same but with an extra dose of excitement this season too. So get ready for the amazing opening of Bigg Boss season 5 on the 5th of September at 6 PM.

The show is going to be aired at 10 PM from Monday to Friday and at 9 PM on Saturdays and Sundays on Star Maa television.

CLICK HERE!! for the Promo of the BIGGest Reality Show #BiggBossTelugu5.