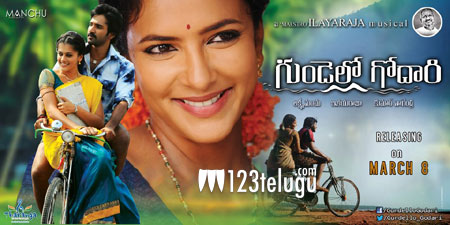 Lakshmi Manchu’s ‘Gundello Godaari’ has turned in a pretty good performance at the Box Office over the weekend. The movie has been buoyed by the Shivarathri holidays and a positive response at the B and C centers. Support for the film is stronger in East and West Godavari areas, indicating that the story has struck a chord there.

The movie is a love story set against the backdrop of the 1986 Godavari floods. Kumar Nagendra handled the direction while maestro Ilayaraja composed the music. Aadi, Tapsee, Lakshmi Manchu and Sundeep Kishan played the lead roles in the film. Cinematography has been handled by M.R.Palanikumar.

The film has been produced on Manchu Entertainments banner.