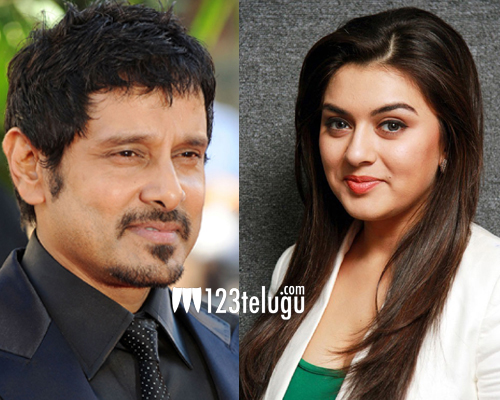 Hansika’s incredible run at the box-office doesn’t seem to end anytime soon. She’s the toast of both Telugu and Tamil film industry these days and almost every major star is keen to work with her. Recently, she had signed a film with Naga Chaitanya and Ram in Telugu and the latest buzz is that she is being considered for a biggie in Tamil.

As per the latest reports, Hansika is the front runner to pair up with Vikram in Dharani’s next Tamil film. This is going to be Vikram’s next film after Shankar’s Ai and the film is expected to go on floors soon. Vidyasagar will score the music and it’ll be produced by Ayngaran International banner. Recently, Hansika was in news when Simbu stated publicly that they are no longer a couple. The actress maintained her silence and didn’t react to the statement.

She’s expected to join the sets of Naga Chaitanya’s Durga soon and Ram starrer Pandaga Chesko will go on floors in April.