Jata kalisey team elated with the huge response for their film
Published on Dec 27, 2015 9:10 am IST 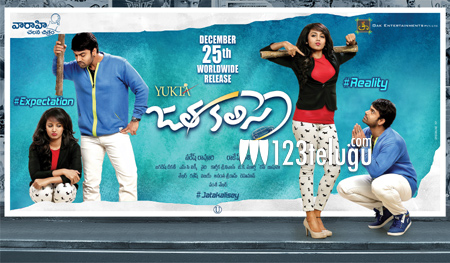 Varahi Chalana Chitram’s Jata kalisey produced by Naresh Ravuri in association with OAK entertainments seems to garner stupendous response after its worldwide release on 25th December. The overseas performance of this movie is also gaining positive talk. Jata kalisey can surely be touted as the final hit of the year 2015 from Varahi, is what the industry sources say.

Debutante director Rakesh Sashii has teamed up with Ashwin and Tejaswi to give a road-comedy movie a rare genre in the Tollywood. Jata kaliseys’ hilarious comedy, the cinematography and dialogues seem to entertain the audiences big time and stood first in the Christmas race. The cast and crew of this film are elated to have a happy ending for the year with a sensational hit.

Trade pundits are predicting that the number of theaters for this film shall increase drastically. Sources say, impressed with the content of the movie, the Tamil rights of this movie are in huge demand and shall be bought by a big banner.