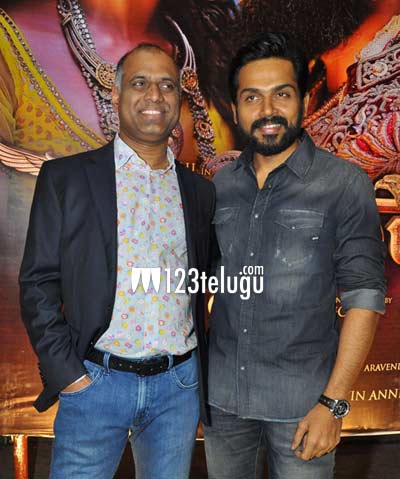 Popular Producer Prasad V Potluri is known for producing quality films under his banner PVP Cinema. He had a sensation year with big success of small film Kshanam and massive bilingual successful film Oopiri is back with a bang. The film Kaashmora released by Prasad V Potluri in Telugu is turning out to be a huge success. This Karthi starrer Periodic Horror Entertainer has garnered a record collection in Karthi’s films by collecting 11 crores in 3 days.

Karthi who made a successful debut in Telugu with films like Aawara, Yuganiki Okkadu and Na Peru Shiva, starred in a straight film Oopiri, in Telugu produced on PVP Cinema banner. It earned him huge fan following in Telugu and that is visible in the massive openings Kaashmora has got. The film is on the way to be biggest solo success in the career of Karthi.

Nayantara who has a long history of successful films in Telugu across different genres has added another feather to her cap. She was seen playing a short but powerful role in Kaashmora that has left the audience spell bound and wanting for more.

Prasad V Potluri is also planning many more films with such different themes. ‘Ghazi’ starring Rana Daggaubati will be his next release on February 24. PVP also starting his next with ‘King’ Nagarjuna after superhit ‘Oopiri’. PVP is producing ‘Raju Gari Gadhi-2’ directed by Ohmkar with Nagarjuna. Following it there will be a film with Superstar Mahesh Babu in Vamsi Paidipally direction.