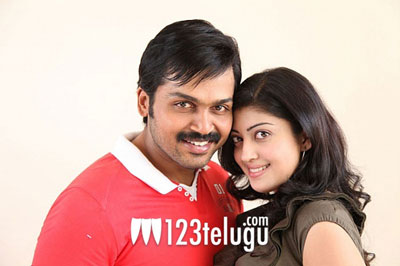 Karthi’s upcoming Tamil film Saguni is going to release in January. The film will be simultaneously released in Telugu as Shakuni. Pranitha Subhash is playing the lead role in the film. Shankar Dayal is directing the film and Gnanavel Raja is producing it on Studio Green banner. The film was earlier supposed to release in December; however, another untitled film starring Karthi, Anushka is going on floors this month. Shakuni is in its final stages of filming and after wrapping up the film’s remaining schedule in December, the producer is planning to release the film either in the 2nd or the 3rd week of January. Shakuni is touted to be a political satire and Karthi will be seen in numerous getups throughout the film.