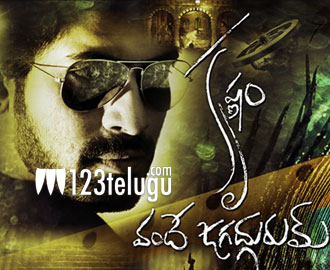 Tollywood NZ bagged the rights for much awaited movie KRISHNAM VANDE JAGADGURUM (KVJ). KVJ is directed by KRISH and starring RANA DAGGUBATI, NAYANATHARA in the lead roles. Sameera Reddy is a surprise package in the movie and will be seen in an item number and Venkatesh to play cameo role in this movie, Music for the movie is composed by Mani Sharma and produced by Y. Rajeev Reddy and Saibabu on First Frame Entertainments. Movie is touted to be commercial action entertainer with super comedy, dealing a social subject which is long-forgotten.

KRISH is well known for his sensible and social subjects like GAMYAM & VEDAM and connects very well with NRI audience. His previous two movies

Krish in his owns words stated that everyone needs a life changing movie to make themselves into a Super Category and Krishnam Vande Jagadgurum is the one for him and Rana. Though Krish is already a proven director with his 2 super successful movies GAMYAM & VEDAM he also stated that Krishnam Vande Jagadgurum movie will take him to the top league of