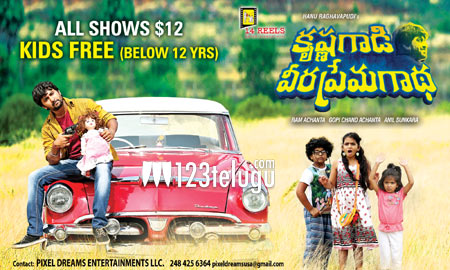 Buoyed by the super success of ‘Krishna Gaadhi Veera Prema Gaadha’, Pixel Dreams, which released the film in USA, announced that kids below 12 years of age can watch the film for free from the third week.As the movie involves kids and also as the kids are very much in love with the movie, this would be the best offer we could give them.The film has already raked in $700 k at the US box-office and the makers thank the audiences for making the film a big hit. Directed by Hanu Raghavapudi, the film has been produced under 14 Reels Entertainment banner by Ram Achanta, Gopi Chand Achanta and Anil Sunkara.Nani and Mehrene play the leads in the movie. Shatru, Harish Uthaman, Brahmaji,Prudhvi, Murali Sharma, Sampath, Annapurnamma etc play other key roles. Music is by VishalChandrasekhar and Yuvraj cranked the camera.