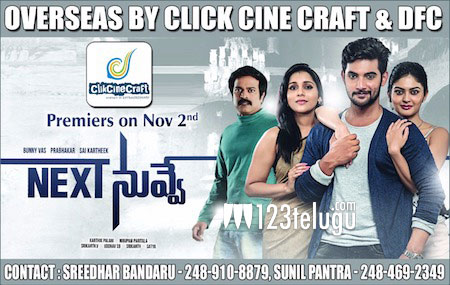 The makers have released the trailer recently. The 2 min 24-second trailer starts off with Vennela Kishore voice-over explaining about hero Aadi’s role and his financial troubles. It shows a scene where Jayaprakash Reddy warns him of dire consequences if the hero fails to repay their 50 lakhs.

Then Vennela Kishore explains that Aadi, heroine Vaibhavi, Rashmi, Brahmaji started a hotel business… the following developments form the crux of the story. Meanwhile, the customers at the hotel will be dying one by one and the death count will be increasing with the each passing day. Srinivas Avasarala is also seen in the trailer for a few seconds.

Director Prabhakar has taken care to show the comedy, emotion, suspense elements in the trailer. On the whole, the trailer gives a feeling that it is a promising Comedy thriller.

Sai Kartheek is the music director. ‘Next Nuvve’ is produced by V4 Movies banner. The movie is slated for release on November 2.

Click Cine Cart & DFC is planning to release this movie and we would like to extend our thanks to Bunny Vasu and all the people who helped in acquiring the rights of this Comedy Thriller.

Email us at clikcinecraftus@gmail.com for any further information / inquiries.