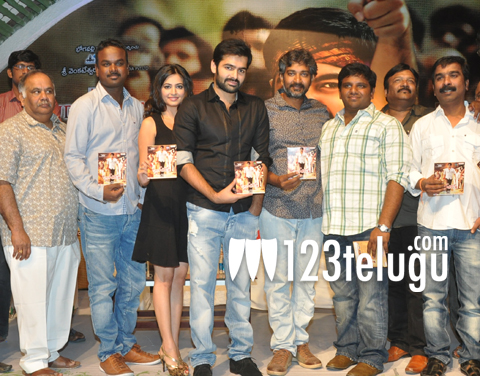 Ram, Kriti Kharbanda starrer Ongole Githa is gearing up for a big release in few weeks and the film’s audio was launched a little while ago in Annapurna Seven Acres studio. Bhaskar has directed the film and BVSN Prasad has produced it. Bapineedu is the executive producer. S S Rajamouli was the chief guest of the audio launch and several others like Ali, Kona Venkat, Vanamali, Bhaskar Bhatla, Sravanthi Ravi Kishore graced the event. Talking about the film, Bhaskar said, “My team worked very hard to make the film. After doing family entertainers, I was eager to do something entirely different and I wanted everyone to enjoy the film. That’s how Ongole Githa began. Ram has done a great job in the film and he suits the character perfectly.”

Ram lauded BVSN Prasad and Bapineedu for supporting the team throughout the shoot and said, “I didn’t want to think much about the project when we started the shoot. I just dedicated myself completely to the character and you’ll be quite surprised to see what Bhaskar has done with the film.” The highlight of the event was a rendition of a special song by a group of folk singers who expressed their gratitude to Bhaskar and lyricist Vanamali. GV Prakash has scored the music and Mani Sharma scored music for one song, apart from composing the background score. Venkatesh is the cinematographer.