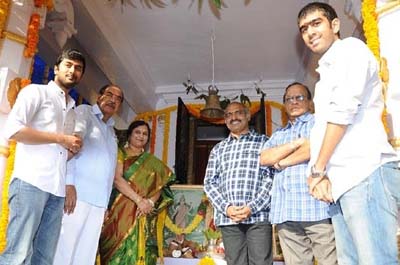 P Sunil Kumar Reddy, the director of Sontha Vooru, Oka Romantic Crime Katha, is back with a romantic entertainer this time. The film was initially titled as ‘Pattudhala’; however, the title has now been changed to ‘Nenem…Chinna Pillana?’. Rahul (Andhala Rakshasi fame) is playing the lead role whereas Tanvi Vyas, former Miss India Earth, is making her debut in Telugu cinema as a lead actress. D Ramanaidu is producing the film under Suresh Productions banner. The film’s first schedule was recently wrapped up and so far, several scenes and a song were canned on the lead cast in Hyderabad.

Talking about the film, Ramanaidu said, “We began the film’s shooting on April 1 and we just wrapped up the first schedule. We are introducing a new actress Tanvi Vyas with this film. It’s a family subject and Sunil Kumar Reddy is dealing it quite well.” Sunil Kumar Reddy revealed that the film is about how the life of a village girl turns beautiful after she moves to the city. The next schedule of the film will take place in Europe. M M Srilekha has scored the music.