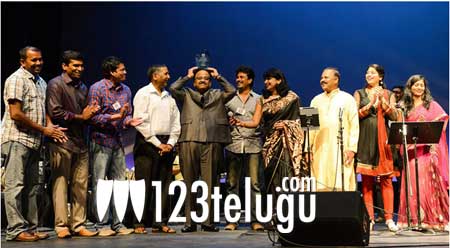 Ravi Tax Services was the “Grand Sponsor” for this event. You Smile Dental, Scopus Consulting, PNG Jewelers, Swagat Indian Cuisine, Peacock Indian Cuisine, and Chimatamusic.com were the “Platinum Sponsors”. Desi 1170AM, Virijallu, and Telugu Times were the “Media sponsors” of this event.

Tickets for the musical extravaganza were sold out well in advance and the auditorium was fully packed with more than 1400 people attending this event. BATA volunteers and committee members have worked tirelessly for last few weeks making the event arrangements, and the smooth flow of everything at the event was the great evidence of this hard work. The fully multi-colored stage with orchestra looked very attractive mesmerizing the guests with very best musical orchestra throughout the show.

Vijaya Aasuri (BATA Cultural Chair) welcomed S.P. Balasubrahmanyam (SPB) onto the stage thanking him for giving BATA an opportunity to host his concert for the 8th time in the Bay Area. In his introductory speech, SPB thanked BATA for hosting his team and he always enjoys coming to the Bay Area because of audience’s love and encouragement that they have been receiving. Vijaya also introduced K.S Chitra, SP Sailaja and Charan, and the orchestra team on to the stage.

SPB and the team of his singers started the program with ” Jagadaananda Kaarakaa “. Then the following songs followed

SPB and his team thanked the audience and the organizers for this opportunity. For every song, the artists received a big applause & a standing ovation from the audience. The concert went for over three overs without any break.

During his commentary and comments in between the songs, SPB praised several of prominent song writers and composers and music legends.

BATA Committee presented plaques to all of the Sponsors and Media partners. BATA committee invited Dr. Lakireddy Hanimi Reddy garu & Jayaram Komati garu (Former TANA President) to present plaques to all the Artists. Deepak from PNG Jewelers presented special gifts to SPB and his team on the stage.