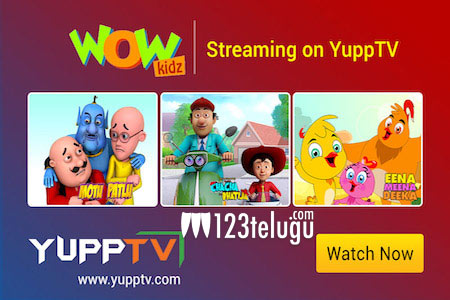 Cosmos-Maya, one of the largest producers of animated kids’ content in the world owns a content bank of 1000+ half hours and runs a highly successful bouquet of digital channels under the umbrella brand WowKidz.

Under the association, WowKidz on YuppTV; the subscribers of YuppTV will be able to enjoy non-stop kids’ entertainment with South Asia’s #1 kids’ show Motu Patlu and some of the most popular shows like Vir – the Robot Boy, Chacha Bhatija, Eena Meena Deeka, Kisna among others. The Kids content on YuppTV will be available in three languages Hindi, Tamil, and Telugu.

Founded by internationally acclaimed Indian filmmakers, Ketan Mehta and Deepa Sahi, Cosmos-Maya targets audiences globally through its brand, WowKidz, which has already become one of the fastest-growing channels for kids’ content with over 4 million active subscribers and over 4 billion cumulative views since its launch in 2016 on the YouTube platform.

Commenting on the association, Mr Uday Reddy, CEO and Founder of YuppTV said, “We are pleased to venture into the kids’ entertainment space with Cosmos-Maya. Kids are a very captive and influential audience and with the help of Cosmos Maya’s popular content on WowKidz we hope to expand our content library and offer them a spectacular experience on our platform. This association aligns with our vision of creating an offering that caters to audiences of all age groups.”

Anish Mehta, CEO of Cosmos-Maya added, “YuppTV enjoys an envious reach across the global diaspora and this partnership will allow us to reach this audience in multiple Indian languages. With the introduction of our specially curated content on WowKidz, YuppTV too will be engaging with a new audience for the first time.

Through this association we hope to introduce our content to kids across geographies especially in the US, UK, Europe, Australia, New Zealand, Canada, Singapore, Malaysia, UAE etc. further augmenting our footprint across the world.”

The latest offering by WowKidz on YuppTV will be available for convenient viewing from 27th April 2018.

YuppTV is one of the world’s largest internet-based TV and On-demand service provider for South Asian content, offering more than 300+ TV channels, 5000+ Movies and 100+ TV Shows in 14 languages.

Emerald Media is led by industry veterans Rajesh Kamat and Paul Aiello, supported by an experienced team of investment and operating executives. The platform primarily focuses on providing growth capital to media, entertainment and digital media companies. YuppTV had earlier raised its Series A round of funding from Poarch Creek Indian Tribe of Alabama.

It also offers YuppFlix, a movie on demand streaming service for Expat Market and recently launched YuppTV Originals to bring forth unconventional story telling in collaboration with the top talent from the movie industry. Originals will be available in episodic format for the digital audience, exclusively on YuppTV’s platform.

YuppTV is the most downloaded Indian SmartTV app and it also boasts of 14.5 million mobile downloads with 4.0 user rating.

KKR backed Emerald Media, a Pan-Asia platform established by the leading global investment firm, for investments in the media and entertainment sector, recently acquired a controlling stake in Cosmos-Maya.

Cosmos-Maya boasts of a 14,000 sq. ft. state of the art studio located in the heart of the Indian entertainment industry – the picturesque Film City in Mumbai. It has expanded to other locations in Mumbai and Hyderabad, with a total area across its studio facilities in excess of 70,000 sq ft.

The company primarily focuses on creating IPs in the kids’ animation space and is presently working on multiple Indian animation TV series with all the leading linear & non-linear broadcasters. As a leading producer of some of the most successful shows in the space, the studio presently has 12 shows on air and 6 under production.

Cosmos-Maya holds a distinct record for consistent delivery of popular Indian animation content and has produced an unprecedented 20000 minutes of original animated content in the last 5 years, comprising over 1000 half hour episodes.

With its launch in 1996, Cosmos-Maya pioneered the art and technology of Animation & Visual Effects in India. Over the last 20 years, the company has delivered award winning animated content, VFX work and game cinematics for global leaders like BBC, Disney, Google, EA among others and its work has fetched several awards at BAFTA, IFTA and Pulcinella to name a few.

Cosmos-Maya’s animation IP bank is highly popular globally among the Indian Diaspora. The bouquet of its YouTube channels under the umbrella brand, WowKidz is one of the fastest growing kids’ platforms from Asia. These channels cumulatively boast of a subscriber base of over 4 Million and total view count of over 4 Billion views as on March 2018.