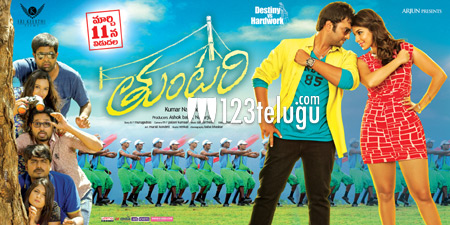 Talented filmmaker Kumar Nagendra is ready to come back with a bang this time with an intense action-comedy entertainer Tuntari, starring young hero Nara Rohit and the debutante actress Latha Hegde. By the looks of teaser and trailer, this film looks gripping. People who like a comedy, action and romantic brand of cinema will definitely go for it. Another reason for our excitement for this flick is because this is the first sports filled entertainer of this year and we hope that this film creates a trend with a bang in Tollywood!

Content and stellar performances delivered by the lead cast and gripping screenplay is what will stand out in this film. All characters in the movie are complex and they take the story forward. Renowned writer AR Murugudoss has written script for this film, which is a remake of Tamil hit Maan Karate. One can except well heightened comedy and action on screen. We bet the duo Kumar Nagendra and Nara Rohit will rock with their union and prove to be one of the most smashing jodi’s this year as well!Why so? Well, let us give you five reasons for that.

1) Gripping plot, a promise of intense action and comedy drama:

The first and utmost reason to watch the film is Kumar Nagendra’s gripping narration and the film promises with a lot of intense action and a hardcore comedy. You can witness some terrific action sequences.

The fans of Nara Rohit especially lady fans will cherish with the new avatar of Rohit. He will be seen in bubbly and romantic role after his debut film ‘Solo’. Director Kumar Nagendra seems to have taken out the best in him. After commercially viable films like Solo, Rowdy follow and Asura, Rohit will step out of his comfort zone to do something so challenging. Produced by Ashok and Nagarjuna under Sree Keerthi Films banner, the film seems to have the right amount of action, romance and comedy.

Tuntari is going to be a visual treat for the audience. It is also a wholesome entertainer with a lot of heart involved, so it’s a soulful film and people should definitely watch it. The film was majorly shot in the exotic locations of Chikkamagaluru, Mangalore and Kodaikanal.

Music of the film, composed by Sai Kartheek can be described as hauntingly beautiful and it is the most important factor in an action-comedy drama like this one. The audio album already became quite popular with right dose of feelgood and fresh lyrics.

Kumar Nagendra has directed this film and has incorporated some real and gritty action sequences to his work. Rohit has gone all out with them as we see him kick some ass in the trailer. And what’s more, this is his first action film! Kabir Duhan Singh, who will be seen as an antagonist in the film, is going to blow your mind with action sequences and he has specially trained for a week to get into the skin of boxer role. The scenes between Rohit and Kabir boxing scenes are going to be terrific.​

Lastly, once you watch Tuntari and come out of the film, there will be a huge smile on your face and you’ll feel very happy.
Tuntari will surely make you satisfy and worth your time and money and we are dying to experience that. It is obvious from the trailer that there will be gripping screenplay and wonderful performances form the lead cast and we can’t wait for it! An indeed wait!!!