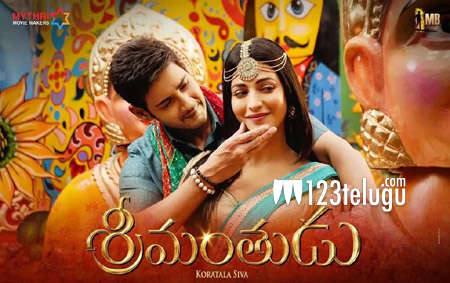 Super Sensational Hit movie Srimanthudu 50 days celebrations were held in Detriot on 04-Oct-2015. More than 300 Detriot movie lovers came to watch the special premier of the movie along with Director of the movie Siva Koratala and producers Naveen Yerneni.

On speaking to the audience, Mr.Koratala Siva has thanked the US movie lovers for making srimanthudu huge hit and he is extremely happy to make a film which would connect to NRI audience. He also remembered that the film has grossed more than 1 million USD in just 5 days. Naveen Yerneni also thanked the movie lovers and mentioned that the success of this movie boosted up his energy levels and confidence over the subject he choose.

Later the Director and producer took up questions from the audience and made a announcement that Mythri movies next movie will be directed by Siva Koratala with NTR in the lead role. This movie will be rolling up from OCT’25th.

Michigan Distributors of the Movie Sunil Pantra, Shiva Polavarapu, Vamsi Karumanchi, UN Rao and Kiran Duggirala who conducted this special screening thanked Siva Koratala for coming to the special show and thanked the producers/audience for coming to the movie and making it a memorable event. Also they mentioned special thanks to Sudheer from Classic Entertainments for giving them the opportunity.