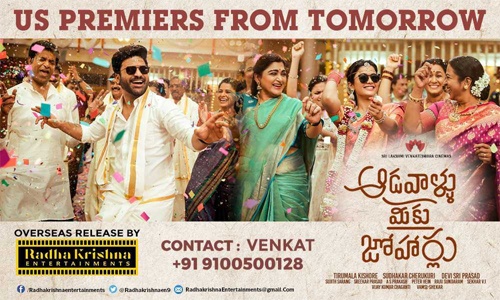 Sharwanand’s Aadavallu Meeku Johaarlu is all set for a grand release on March 4th with US Premieres on March 3rd. Leading US Distributor, Radhakrishna Entertainments has planned a massive Premieres across the country.

Aadavallu Meeku Johaarlu directed by Kishore Tirumala has happening heroine Rashmika Mandanna as the female lead. Senior actresses Radhika, Khushboo, and Urvashi are the part of the supporting cast. Brahmanandham, Vennela Kishore, and Satya will have some hilarious episodes to their name.

Devi Sri Prasad has composed music for the film and all the songs released so far have got superb response. The trailer released recently enhanced the expectations on the film.

The movie is the first ever complete family entertainer in Telugu after a long time. AMJ is packaged with ample dose of comedy and family emotions to appeal to all sections of the audience. It’s time for the audience to forget the Pandemic blues and enjoy the film with their families in theaters.