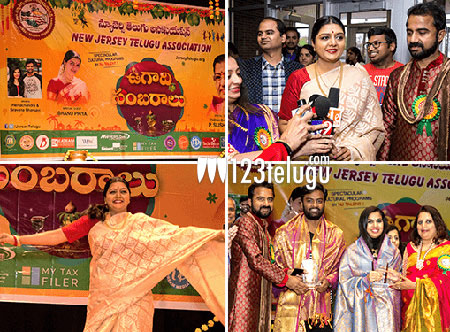 Veteran actress Bhanupriya stands as an epitome of Telugu tradition and classical dance. She surprised all the audience with her brief dance on the dais of Ugadi Celebrations at the New Jersey Telugu Association. She attended as the Chief Guest for the event and when asked to shake her leg for the song “GuvvaGorinkatho” from Khaidi#786 of 1988, she danced spontaneously with all the required agility and grace. The audience stood up in applause and gave a standing ovation. Popular singers from Telugu Film Industry- Hema Chandra and SravaniBhargavi entertained the audience throughout the event with their songs.

New Jersey Telugu Association (NJTA) celebrated its first anniversary on 22nd of April in Plainfield, NJ. Around 1500 have attended this event that started with PanchangaSravanam. Several cultural programs were followed and audience got entertained to the fullest. A grand dinner by Deccan Spice was relished by all. Both local and Tollywood artistes participated in this event.

The dances by the local youngsters rocked the dais. On this occasion NJTA Founder Chinna Vasudeva Reddy thanked all the sponsors and all the supporters for the event.

“NJTA has been standing up to its idea of presenting arts and culture of Telugu is a different style”, said Vasudeva Reddy.

Bhanupriya appreciated the interest and respect shown by Telugus in New Jersey towards Telugu culture and arts. After seeing the success of this event, with the doubled enthusiasm NJTA in association with Vegesna Foundation is organizing a fund raising event on 21st May followed by a semi classical and film music workshop by ParthuNemanifrom 9th July to 16th July 2017.

For more details and regular updates, please check our website JerseyTelugu.organd on FB.com/JerseyTelugu