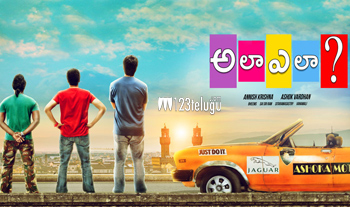 ‘People Media Entertainment proudly announces that it has officially acquired the overseas exhibition rights of “ALA ELA” movie in overseas’.

Ala Ela ​a wonderful youthful comedic entertainer is all set to release in overseas market this 19th of dec and is expected to withstands the Lingaa juggernaut
Rahul Ravichandran, who made an impressive debut in Telugu with Andala Rakshasi is ready with yet another love story titled ‘Ala Ela’. Love and Friendship form the crux of the movie and some rich visuals shot in exotic locations are going to be the highlight in this family entertainer. Rahul Ravichandran, Vennela Kishore, Shani and Bhanusree Mehra play the lead roles in the film directed by Anish Krishna.Ala Ela Movie Theatrical Trailer http://www.123telugu.com/video/movies/A/Ala_Ela/Trailer.html
Artiste’s Performance :  The performances of Rahul Ravindran, Vennela Kishore and Shani are major highlights of this film. Rahul is apt in his role and has given a good performance. Vennela Kishore’s comic timing is superb and entertains throughout the film. Shani’s different get ups and his characterization is funny. Krishna Bhagawan and Kondavalasa are also good in their respective roles and entertain the audience with their punch dialogues.
Plus Points : The performances of the lead characters are one of the main assets of this film. They have carried the whole film on their shoulders. The hilarious pre-climax entertains the audiences.
Analysis :  Cinematography of the film is very good and every location has been showcased beautifully. Bheems music is decent and every song has good lyrical values. Editing and art work of the film is decent. Production values of the film are very good. Although director Anesh is a debutant he makes a mark with his decent screenplay.
Verdict :  On the whole ‘Ala Ela’ is a wonderful youthful comedy entertainer. If you want to relax then go and watch this youthful comedy entertainer
Director: Aneesh Krishna
Producer: Ashok Kumar
Music Director: Bheems Ceciroleo
Cast: Rahul Ravindran, Kushi, Vennela Kishore

For any further details on overseas exhibition rights feel free to contact alaelausa@gmail.com​ or call Navya @ 4252091418