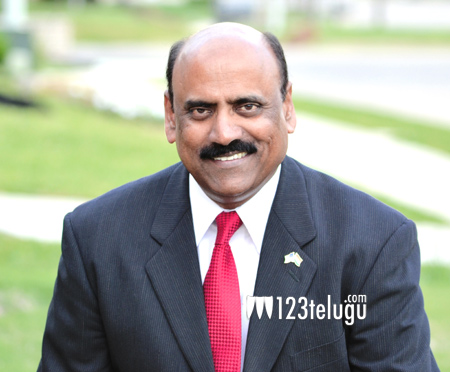 The following are the awardees:

NRI Community Leader, Prasad Thotakura, Padma Bhushan, Nata Sekhara G. Krishna; Guinness Book of Worlds record holder Director Smt. G. Vijaya Nirmala; Dharskendra K. Raghavendra Rao; Comedian actor Ali; Producer, Director and Actor R. Narayana Murthy, Senior High Court Lawyer Sri. Yellamraju Gopalakrishna Murthy (104 yrs); Famous Writer Smt. C. Ananda Ramam; SVBC Channel CEO Dr. P. Madhusudhana Rao; Celebrity Mistress of Ceremonies Smt. MKR Asha Latha. Mr. Prasad Thotakura from Dallas, TX is an outstanding, dynamic, corporate and community leader, a bridge builder, a mentor and a role model of the immigrants has been serving the Indian American community for more than 25 years. He is very genuine in what he believes in and always receptive to new ideas. At times, he works in extreme conditions to help people even though he doesn’t know them personally. He puts his talent and tenacity to work and achieves desired results. Prasad, a well-known community leader, a man of many facets incorporates indefatigable community service and human rights advocacy. He has many exemplary civic leadership and community service achievements impacting the ever growing active and highly respected Indian American community. Mr. Thotakura, who inspires the community, is a highly dedicated leader with a strong desire to serve with zeal. His compassion and concern for the community is reflected in every one of his impressive actions. He has earned outstanding appreciation and respect among all cross sections of the Indian American community as the person to go to in the hour of need. His biggest contribution to the community – special efforts in serving the needy irrespective of their regional, religious denominations including senior citizens, women and youth. He has been a crusader in a true sense and his contribution towards a strong, unified and prosperous Indian American community will be remembered for ever.
Prasad is a community activist who spends umpteen number of hours and goes beyond the call of duty to serve the public. He loves Indian arts, culture, music, traditions and especially Telugu language & literature.

Mr. Thotakura has provided leadership through several organizations, including:

Mr. Prasad Thotakura is well respected by not only Indian Americans but also by the US politicians and policy makers. Prasad has been a pillar supporting the growing Indian community in the United States and truly deserves this award.