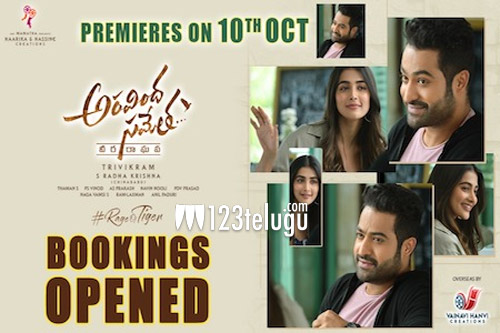 It has been a dream to most of us, witnessing Jr NTR work with Trivikram. NTR, has been known for delivering the dialogues impeccably and our Maatala Mantrikudu is known to entice us with his own way of storytelling and it is going to be great to watch them together!

‘Aravinda Sametha Veera Raghava’ is set in the backdrop of Rayalaseema with Pooja Hegde and Eesha Rebba as leading ladies. From the teaser and the music, the film looks like a family oriented drama filled with action, leaving no stone untouched.

With SS Thaman stepping the game up, S Radhakrishna of Haarika & Hassine Creations managed to lock us with a musical full of touche songs like ‘Peniviti’ and tapping songs like ‘Anaganaga’. It’s going to a full-fledged ride and if you haven’t watched a movie with your family in a while, here’s your chance. A whole family entertainer at your eyes!

The audience can now proceed to book the tickets across the USA through various platforms for various theatres with the desired date and time.

The premiers of Aravinda Sametha Veera Raghava will be on October 10th, followed by the Regular shows on October 11th, 2018.

CLICK HERE!! to check the Schedules in your Nearest Theaters.