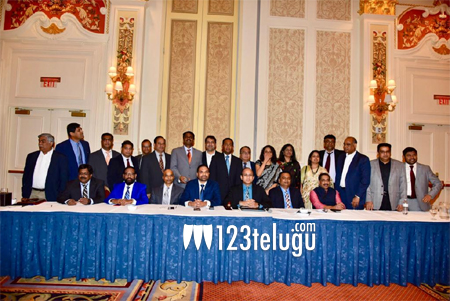 ATA, American Telugu Association [ATA], a 28 year old Telugu Organization serving the interests of burgeoning Telugu Community in USA elected Parmesh Bheemreddy as its new President at the board meeting attended by large number of ATA Trustees, Executive Board members and other supporters.

Upon being elected, Mr.Parmesh Bheemreddy was promptly sworn in as the President on January 19th at the board meeting held in Las Vegas.

Born in Pothireddypadu village of Nagarkurnool district of Telangana Mr.Bheemreddy came to US on a student visa to pursue higher education in Computer Science. Being a software professional himself, established a firm and helped many students and professional from India to settle down in US. Married to a cardiologist Sarita, Bheemreddy is a well-known Community Volunteer, co-founder of Palamuru NRI forum and conducted various charity activities across the district.. An avid community activist, Mr.Bheemreddy has been an integral part of ATA since Inception and served in various positions like Secretary for the 12th Convention and as a Convener for the Philadelphia Conference in 2014.

ATA board was sworn in on the occasion as well, raising the Board of Trustees count from 27 to 31. Mr.Bhuvanesh Boojala from DC Metropolitan area was elected unanimously as the President Elect.

Presiding over the board meeting, the new president not only vowed to preserve and strengthen the Telugu community across North America but also promised to further promote the literary, cultural, social, educational and rich cultural values of the community strictly abiding by the constitution of ATA.

Unveiling his vision, Mr.Bheemreddy quoted that ATA under his leadership will include focus areas like immigration, SAT Training, exchange student onboarding procedures, Medical and Dental camps for Senior Citizens and Visitors, Matrimonial and Emergency Services.

Mr.Bheemreddy was ecstatic to announce that the new ATA Foundation Scholarship program will award 10 scholarships to meritorious students of economically backward classes of $1000 each.

Mr.Bheemreddy thanked the outgoing President Karunakar Asireddy, EC and board for its outstanding contribution to ATA and expanding the organization to new areas like Nashville and Boston areas.