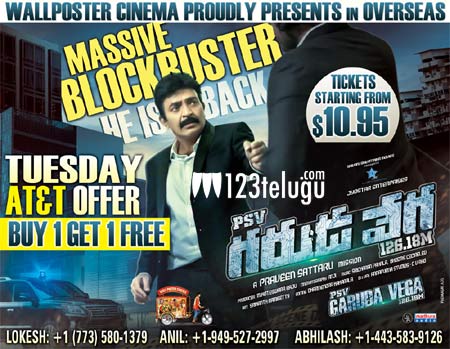 Telugu movie PSV Garuda Vega 126.18M which released last week has received rave reviews and is running to housefull shows has achieved a no mean feat for a Telugu movie. It raked in Quarter Million Dollars in less than 3 days and is now inching towards Half a Million in US. Due to huge demand from audience, this movie is being released in new countries too. Within US, the screen count is being increased for the second week from the already released 80+ locations, which reflects the craze for this movie in public. Sunday boxoffice collections for this movie has been on par with Friday’s number which hints at a bigger second week. Many shows in US are sold out and people who went to theater without an advance booking had to return home due to soldout shows. Watch this stylish thriller on big screen with friends and family at a discounted price with AT&T Tuesday offer. You can also use Moviepass, Fandango B2G1 if you are not an AT&T user. Dont miss it. Go watch this visually wonderful, edge of the seat thriller.