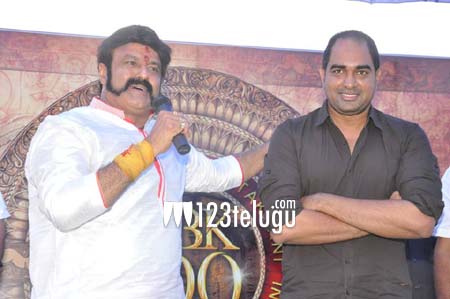 After working rigorously for two weeks, the first schedule of Nandamuri Balakrishna’s prestigious 100th film Gautamiputra Satakarni, held in Morocco, has been wrapped up. Actor Balakarishna, National-award winning director Krish, producer Rajeev have managed to finish the schedule as per the plan.

The film happens to be the first Indian film to be shot in the exotic locales of Morocco. Action episodes between Balakrishna and Kabir Bedi, set against 1st AD, were shot with the help of Hollywood fighters under the aegis of action choreographers Ram-Lakshman. The movie was shot in Atlas Studios, Varu Georgia in the Morocco. 1000 people were shot in the action scenes while 200 horses and camels were also involved in the shoot.

Sharing the working experience, director Krish shares, “I’m glad that the film’s first schedule is completed as per our plan. Balakrishna garu worked 14 hours daily during the shoot and set as an example. The energy level with which he worked from the start to the end inspired us. Actors and technicians have supported us.”

Y Rajeev Reddy is producing the film under First Frame Entertainments banner and Bibo Sreenivas is presenting the movie.