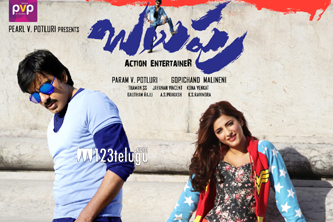 BlueSky Cinemas, one of the leading players in overseas market for Indian movies is now brining another full length entertainer “Balupu” to entire overseas market.
Balupu is being produced by Prasad Vara Potluri under PVP Cinemas banner and stars Ravi Teja, Shruti Haasan, Anjali in lead roles followed by Bramhanandam, Ali, Prakash Raj, Ashutosh Rana, Nassar and others.
This high energy entertainer is already getting pre-release positive buzz and touted to be Ravi Teja’s comeback movie. Scenes between Ravi Teja, Bramhanadam and Shruthi Hassan are supposed to be hilarious and very entertaining with glamour and performances. Shruthi Hassan will be doing a comedy based role in this movie and expected to be the show stealer with her glamour and performance! Lakshmi Rai special appearance is also another attraction of the film.
Gopi Chand Malineni who has directed Don Seenu and Body Guard is directing this movie and expected to be one of the top five films of Ravi Teja.
Music is composed by SS. Thaman and already got decent response. Some of the songs were canned in Lisbon of Portugal thus making the first South Indian film being filmed in Portugal.
The film will be releasing on June 28th with Premiere shows on Jun 27th in all over overseas countries.
BlueSky is happy to associate with PVP banner and our thanks to PVP for his support. Also special thanks to Rajeev for co-coordinating and making this happen.