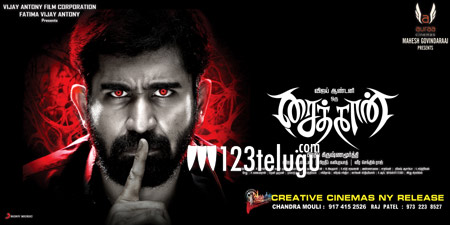 Music director-turned- actor-Vijay Antony has become more popular in Telugu with one film Bichagadu. This movie has collected 25 crore which is said to be highest grosser for dubbed version. This movie has completed 75 days in 200 centers in both Telugu speaking states and heading towards 100 days successfully.
Naturally, distributors have evinced interest to buy the rights of his next film which is being made in Tamil as a Saitan. Recently, its first look poster has been released and getting the superb response from all the quarters of Tamil Nadu. Now, it is planned to release in Telugu as ‘Bethaludu’.

Bethaludu is touted to be a suspense thriller and directed by PradeepKrishnamoorthy. Arundhathi Nair and Alisha Abdullah are playing female leads of the film. Earlier Vijay Antony’s films Dr. Saleem and Nakili were introduced to Telugu audiences but it was Bichagadu which brought fame and name to him.
Sources also say that if this film strikes a chord with audiences, Vijay Antony is in plans to do direct Telugu films as his face is more familiar to Telugu audiences now. Vijay Antony’s film career is much interesting as he got stardom just overnight in Tollywood and doing stunning business with Bichagadu.

The confidence given by the success of ‘Bichagadu’ is so much that Tamil actor Vijay Antony is making some surprising decisions regarding his upcoming film ‘Bethaludu’.

The film’s producer on Monday issued a press release to confirm that the psychological thriller will hit screens in both the Telugu and Tamil languages on 1st December, which means a Thursday release. The release date of Tamil version, ‘Saithan’ was earlier announced as 2nd Dec but the film has surprisingly been preponed by a day to have an unconventional Thursday release December 1.

Generally filmmakers tend to release their films on Friday keeping the weekend advantage in mind. Unless Thursday is a holiday, rarely a producer dares to release the film on that day and Vijay Antony has just announced that rare phenomenon. This daring move has been revealed a few days after the actor surprised everyone by showing 10 minutes of his unreleased film.

It must be noted that Ram Charan’s highly anticipated film ‘Dhruva’ is releasing on 9th Dec, only a week after the release of ‘Bethaludu’. Just look at the awe inspiring confidence of Antony.