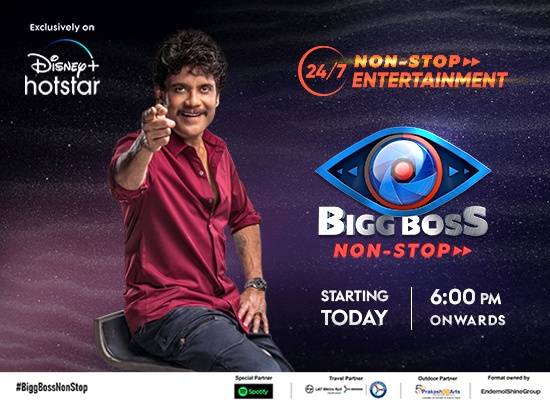 Bigg Boss, the show that has been entertaining the Telugu audience for 5 seasons, is back with a spin off version on the OTT Streaming Platform, Disney Plus Hotstar. Having witnessed tremendous success among the audience over seasons, the popular reality show has become India’s most loved format and is all set to entertain us all again.

Making the drama available for 24 hours a day, Disney Plus Hotstar has brought this incredible show even closer to the hearts of the public.

The OTT version of this sensational show promises to be even bolder, crazier, and more entertaining than ever. Ahead of the season, the audience is intrigued by one question – Who all are going to be trapped in the house? All those questions will be answered as the show gets unveiled by the Superstar host Nagarjuna. Nagarjuna who has also hosted the TV version of the show brings in the X-factor to the show with his charm.

Watch the Season Premiere on February 26th at 6p.m., as the host King Nagarjuna serves it hot with his entertaining persona.

Your favourite show will not just air for an hour now. It will be available to watch for 24 hours Non Stop on Disney Plus Hotstar.