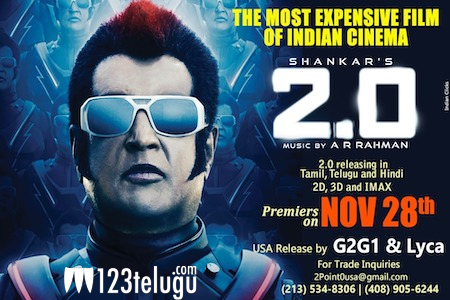 G2G1 International Inc is happy and excited to announce our next release Indian Cinema’s Biggest Visual Extravaganza and Most Expensive Film “2.0” in North American market in association with Lyca Productions.

2.0 is labeled as the $75 million VFX wonder from INDIA by Variety on TIFF edition. 2.0 is produced by passionate movie mogul from UK Mr. Subaskaran A (Lyca Productions) & helmed by Man of Midas Touch Director Shankar (Endhiran, Sivaji fame).

Conceived as an conceptual sequel to 2010 International blockbuster Endhiran, the Robot, 2.0 ups the ante several notches by getting the coveted honor of the 1st Indian movie to be filmed using 3D cameras & introducing the new 4D sound technology to world cinema.

As per social media’s network circle, there are over 140+ million trailer views clocked in less than a month and also rated a top most Indian movies to watch in 2018 as per IMDB site.

We are happy to associate with Lyca in bringing the magnum opus to North American market in Best 3D screens near you.

We would like you to experience the grandeur in 3D and every effort is made to book the large screen format 3D -XD and 3D-RPX screens in leading cinema chains in North America.

Our sincere and heartfelt thanks to Mr. Karunamoorthy and Lyca Productions for their continuous support and trusting in us.

G2G1 International is joining hands with Lyca for the USA release of 2.0 in all languages Tamil, Telugu and Hindi. Theater list will be available soon to enjoy the biggest spectacle with family & kids this holiday season, opening with premieres on Nov 28th.