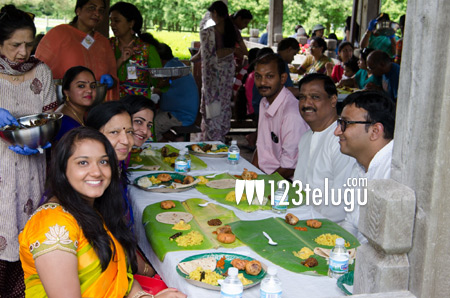 Chicago Andhra Association (CAA) a new Telugu Organization of Andhrites in Chicago land area held its first ever ‘Vanabhojanalu’, Picnic, at St. James Forest Preserve in Naperville on June 11th. According to the organizers, the event drew around 1200 people, a humungous crowd never heard about in Chicago land area especially for a Telugu Picnic event.

Chicago was abuzz with the Vanabhojanalu event news with palpable excitement about the event much prior to the event kick-off. On the Event day, since 11 AM in the morning the crowds started thronging the forest preserve. By noon… No wonder, the park was filled with Andhra fervor & flavor.

‘Aritaku lo bhojanam’, Traditional Andhra style lunch in a banana leaf was the highlight of the event. Beautiful Saree clad Andhra women serving at the event were a sight not to be missed. Traditionally, Andhra marriages & events are held in such a fashion and had everybody talking that it made them felt as if they were literally in Andhra Pradesh.

Adults & Kids were having a blast enjoying games like musicals chairs, tug of war along with their families. Cooking competition paved the way for cooking instructions of how to make Andhra Laddu, a delicacy that is very popular among Andhrites. It was a bemused spectacle to watch folks standing in line to form an Andhra Pradesh state map. A huge contingent of Telugu’s from other states & regions were witnessed having a great time & volunteering at the event echoed the sentiment that Telugu’s are all indeed united and one.

Sai Yandamuri a long term Telugu resident of Chicago commented “In the last 25 years, I have never witnessed such an event like this that is filled up with maximum capacity crowd of Telugu people with so much enthusiasm”. A visiting parent from India expressed his views like this, “I see the andhrites here are more passionate for helping community here compared to our motherland. I am thoroughly thrilled with the Arati akulalo bhojanam”