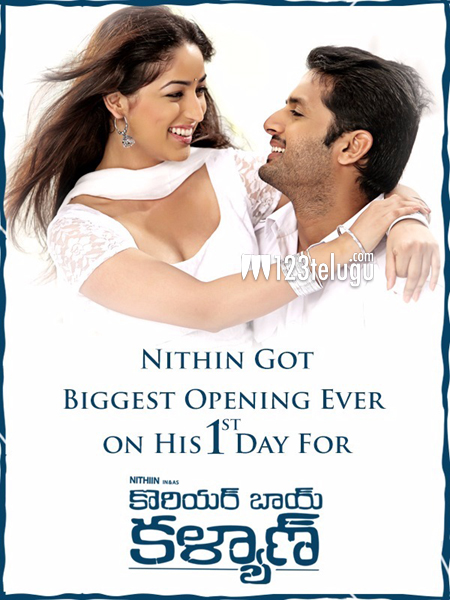 It’s official- Courier Boy Kalyan is Nithin’s biggest opening ever! The film had a great opening thanks to the extensive promotional campaign with the two faces of the film-Nithin and Gautham Vasudev Menon appearing on all media, as well as the audio doing very well.

The report from the cinemas and from the audience has been extremely positive, with bookings being full and tickets sold out for the entire weekend. It is always encouraging when new themes and genres are accepted by the audience, because it encourages actors to try different roles. Courier Boy Kalyan is a medical thriller with romance, and Nithin is the biggest highlight with a career topping performance both as the innocent lover boy kalyan and as the man with the package to deliver.

The film is going strong thanks to good word-of-mouth from audiences inspite of mixed reviews from reviewers and critics. The producers, including Gautham Vasudev Menon and the director saw the film with audiences at cinemas on the opening day and were overwhelmed by the positive response, and are extremely happy with the results.