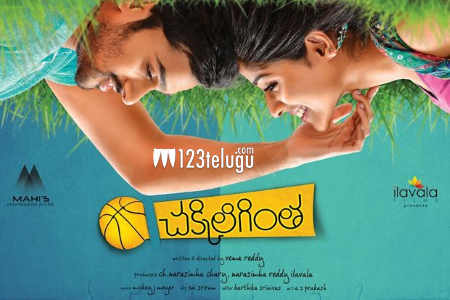 Sumanth Ashwin and Rehana starring “CHAKKILIGINTHA” is the upcoming Telugu romantic entertainer releasing in overseas on Dec 5th by CineGalaxy, Inc. This film is being directed by Vema Reddy who worked as an associate director and screen writer for Sukumar earlier. This is Vema Reddy’s debut film as a director. Another debutante Rehana is playing the female lead in the movie.

Music is composed by Mickey J Meyer and already the music album is a top chartbuster. Ch.Narasimhachari and Narasimha Reddy, who are jointly producing the film on Mahis Entertainment banner, said that the concept of the film is very fresh and they are confident that the film will be successful.

Sumanth Ashwin is on a roll with the success of back to back films “anthaku mundhu Aa Tharuvatha” and “Lovers” is coming again to bang a success with this film. Chaitanya Krishna, Thagubothu Ramesh, Sapthagiri, Viva Harsha, Surekha Vani, Ambati Srinu are in support roles.