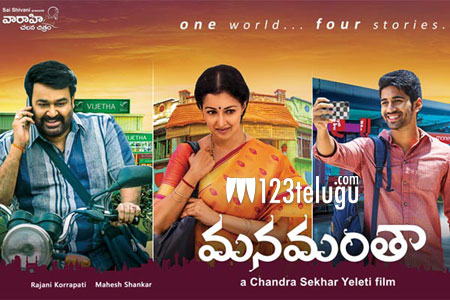 Manamantha has been a special film for which Telugu, Tamil and Malayalam audience are waiting. Starring Mohanlal, Gauthami, Vishwanth and Raina Rao in lead roles, the film is directed by most versatile Chandra Shekar Yeleti.
Yeleti is a creative director known for experimenting on different and unfamiliar stories. His adventurous thriller Aithe won National award, Anukokunda Oka Roju in thriller genre is again made on a novel point. Later, Okkadunnadu based on Bombay blood group is first of its kind with an excited story line followed by Prayanam is romantically made within an airport. Lastly, the adventurous Sahasam is a fictitious narrative received appreciation.
Manamantha also stands to Yeleti brand based on sensible human drama and subtle emotions based on four stories connected with one world. The film promises a wholesome entertainer with a robust casting. Eminent producer Sai Korrapati produced the movie on Vaaraahi Chalana Chitram banner well known for super hits like Eega, Legend and Oohalu Gusa Gusalade.