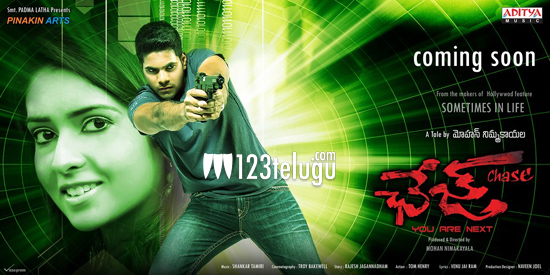 The movie is produced under the banner PINAKIN ARTS and Association with Ideal Studios IncUSA.

The Chase movie is Produced By Padma Latha & Directed by Mohan Nimakayala. The movie is produced under the banner PINAKIN ARTS and Association with Ideal Studios Inc.USA, The film introduces new pairs Ram Divyesh and Spandana Alluri in the lead roles. Music composed by SHANKAR TAMIRI and Lyrics by Venu Jairam. Camera handled by Hollywood director of photography TROY BAKEWELL and songs cinematography by Shaneil Deo and other Hollywood technicians handle other departments respectively.

The entire movie was shot in the USA in various locations, the movie has pulsating action episodes choreographed by a Hollywood stunt Master Tom Henry. The film is scheduled for an Audio release soon by Aditya Music Company, and is getting ready for release soon.