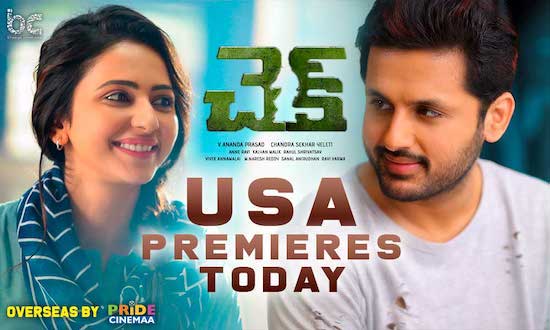 Nithiin’s most awaited movie CHECK movie premiers today in the USA. The film is written and directed by National Award-winning director Chandra Sekhar Yeleti. The trailer promises an intelligent and fast-paced crime thriller with a well-written screenplay.

The film revolves around a death row convict, who is labeled as a “traitor” and “terrorist”. This narrative piqued audience interest. What did the male protagonist do to be called such harsh names? Nonetheless, he unwillingly finds himself in a game rigged against him. His chance of survival remains bleak after his court defeat and prison trauma.

There is only one ray of hope, the game of the mind: Chess. He has no option but to fight his enemies physically and intellectually while making his moves on the chessboard.

The film also stars Rakul Preet Singh & Priya Prakash Varrier. The Music composed by Kalyani Malik while cinematography is done by Rahul Shrivatsav and is edited by Sanal Anirudhan. The film is produced by V. Ananda Prasad under Bhavya Creations banner.

Don’t miss to watch this edge of the seat crime thriller in theatres near you.