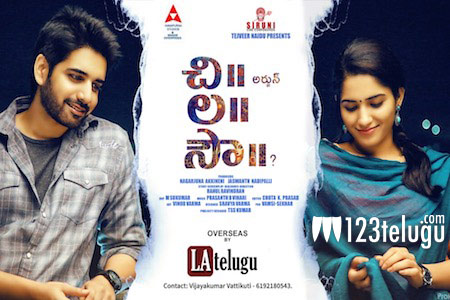 The overseas rights for Sushanth’s Chi.La.Sow have been acquired by LA Telugu. It gives us huge amount of pleasure to bring this youthful entertainer to the audiences.

The movie is being directed by Rahul Ravindran and this is the first time that he has taken up this role as a director. There can’t be a much younger and energetic combination and it is sure to win the hearts of the audiences.

The movie is being produced by Annapurna Studios and Manam Enterprises in collaboration with Siruni Cine Corporation. The involvement of Annapurna studios in this project has increased the expectations of the film.

Known for his energetic and dynamic performances, Sushanth now plays the role of fan of Lord Hanuman and Salman khan. He finds happiness in being a bachelor. Ruhani Sharma plays the role of the leading actress and it would be a treat for the viewers watching such bright and talented youngsters coming under one frame.

The teaser of the movie was launched and has been trending since then. It has a refreshing texture and is sure going to make the audiences laugh off their seats.

This ultimate combination of young artists with young producers is definitely a deal breaker and is sure to pave path for much more young talent.

The movie is set for its release on July 27th worldwide with US premiers on 26th.