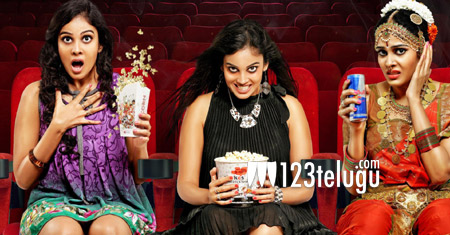 Kartika Dream Creations, a new production house, is ready to release its first film ‘Chitram Bhalare Vichitram’ on 1st of Jan 2016 as a New Year’s feast for Comedy/Thriller/Drama fans across AP and Telangana.

This film is directed by a State Award Film maker ‘Bhanu Prakash Balusu’ and produced by ‘P. Umakanth’ with ‘Chandini’ in a lead role as a ghost, ‘Manoj’ and ‘Anil’ performing other major roles. Talking about the story director says “a group of curious, funny and interesting individuals gather in a place to make a movie. All their plans get interrupted by the ghost who has passion in films. How the film finally turns up and their struggles to get rid of the ghost becomes much more fun and exciting”.

Producer says “After watching ‘Prayogam’ I am very much impressed with the direction abilities of Bhanu Prakash. I personally like comedy genre films and I thoroughly enjoyed this script while narrating. It is not a regular revenge story; it has very fresh & unique scenes, situations and story in it. It also made me very emotional in the end. I believe audience will enjoy as much as I did. We are now ready with the first copy and are releasing on Jan 1st as a New Year’s gift to the audience.”