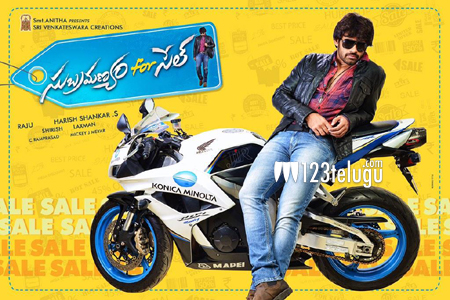 The overseas rights for the much awaited entertainer “Subramanyam for Sale” have been acquired by Classic Entertainments (USA). After his latest hit “Pilla Nuvvu Leni Jeevitham”, the very talented Sai Dharm Tej – the nephew of Megastar Chiranjeevi is all set to present himself with a forthcoming action entertainer “Subramanyam for Sale” along with leading ladies Regina Cassandra and Adah Sharma.

The film scheduled to release on September 23rd has been produced by one of the most successful film producers Dil Raju, under the banner of Sri Venkateswara Creations. Dil Raju has the ability to feel the pulse of the audience and always delivers movies with family values. Out of the 18 movies produced, he has seen several blockbusters and decent grossers. The film has been directed by Harish Shankar who has delivered the super hit blockbuster/highest grosser Gabbar Singh with Pawan Kalyan. It will be interesting to see his magic at play with “Subramanyam for Sale”. The original soundtrack for the movie is composed by the very talented Mickey J Meyer who has established himself as a composer of fresh tunes. It is to note that the songs of “Subramanyam for Sale” are at the top of the charts as well as hitting several air waves.

Classic Entertainments has been in the industry for the past 15 years and has been successfully bringing quality, family movies to the culturally rich Telugu speaking communities in the United States. After their successful distribution of the recent block buster Mahesh Babu’s Srimanthudu, Classic Entertainments is hoping to clinch another great run at the box office as Dil Raju- Harish Shankar- Sai Dharam Tej- Mickey Meyer combination is ready for a complete package of fun and entertainment.