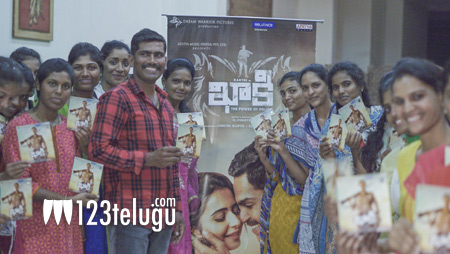 It’s a proud moment for ‘Khakee’ team. About 1500 cops watched the special screenings of the film, held at RBVRR Telangana Police Academy and Prasad Labs in Hyderabad on Saturday and Sunday.

A.C.P.Sameer along with other inspectors and trainees, have immensely liked the film and gave unanimous thumbs to it. They said that police training scenes, investigation scenes and many other scenes in the film are very close to reality. They felt happy with the way cops are portrayed in the film and said that it’s not a ‘reel’ story, but a ‘real’ one.

The film, which is a tribute to the Police, is based on real incidents that happened between 1995-2005. The way Tamil Nadu police had sacrificed their personal lives, faced many hardships and suffered losses to crack a sensational case and nabbed a group of ruthless bandits, who committed many murders in their state, has been portrayed very realistically in the film and cops have liked it.

SP Jangid, the cop who led who led ‘Operation Bawaria’ that inspired the film, has also watched the film recently and praised the director H Vinoth and Karthi for their brilliant work. Produced by Umesh Gupta and Subhash Gupta of Aditya Music Pvt.Ltd in Telugu, ‘Khakee’ has turned out to be a massive hit and the collections are steady even in the second week.