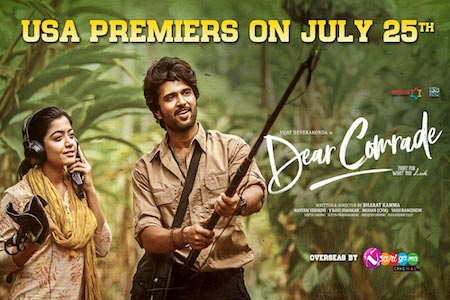 The film’s teaser was unveiled back in March with the trailer released in July. Both of them have shown the intense drama and romance between the lead actors, Deverakonda a Student Union leader and Rashmika as an aspiring cricket player. The two leads are sharing the screen again after blockbuster Geetha Govindham.

All Telugu version Hard drives are reaching theatres today. i.e. 7/23 while KDMs will be delivered on Wednesday 7/24.

An emotional and intense love story of Bobby & Lilly, the film will have action elements with the lead having a communist ideology.

Dear Comrade is the biggest release of Vijay Deverakonda across the United States ever since his career started, and is expected to be a successful grosser.

Most of the theatres have opened bookings already a while back and minor pending ones should be up anytime from now.

Enjoy this Romantic Action Drama Entertainer in a big screen near you with your friends and family starting this Thursday 7/25.