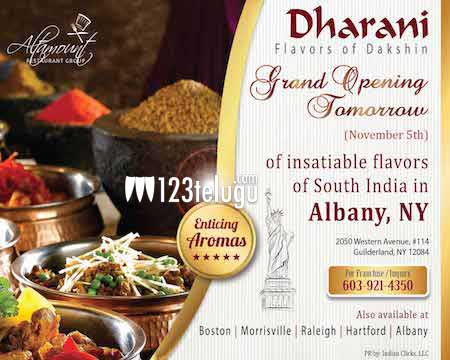 USA, New York, Nov 04th 2016: Dharani, a venture of Altamount Restaurant Group, is opening its new restaurant in Albany – the economic and cultural core of the capital district of New York state.

The new restaurant will be opened with a promise to serve authentic South Indian dishes of varied range from Nizam’s Kitchen to Malabar curries, Coastal favorites to Chettinad delicacies.

Dharani is strategically located in Guilderland and it is only few minutes away from the twenty mall, Cross gates mall, empire state buildings, state campus offices and GE offices.

The Group has acquired an old iconic restaurant of 6000 sqft with 200 seating and Function hall. It has been refurbished tastefully with a modern setting to suit the mood and taste of Indians craving to visit the place for authentic Indian food. “We have managed to preserve the historic touch of the property as the residents of Albany have been aware of the places since its existence from 1980” said Aswani Sreedhar Thotakura, managing partner of Dharani.

With a tagline of Dakshin, the restaurant aptly covers every region and sub-cuisine of South India bringing not just popular but ethnic dishes too on board.

Speaking on this occasion, Bhaskar Rednam, founder of Altamount Group expressed his vision of expanding the restaurant chain throughout North America with a commitment to the organic growth, consistency in taste and quality.

“The successes of our existing locations have been phenomenal. We have received a tremendous response for our restaurants in Boston and North Carolina. Our objective is to bring traditional South Indian dishes, snacks and several regional delicacies closer to the larger Indian population in the US.

After seeing spurt in inquiries from various locations, we are now expanding to Latham New York along with multiple locations in Massachusetts, Connecticut, New York, New Jersey, Virginia and North Carolina.”

Come this weekend and enjoy the GRAND MEGA BUFFET from Dharani Albany at: