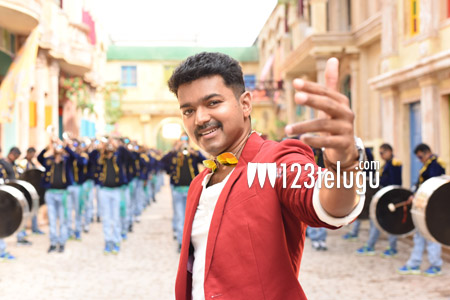 Well known producer Dil Raju and producer Kalaipuli S Thanu will be releasing the Telugu version of Vijay’s ‘Theri’ in Andhra Pradesh and Telangana. The movie is currently in post-production and the Telugu title will be announced by the team shortly.

Theri has been directed by Atlee, who shot to fame with ‘Raja Rani’. Made with a big budget and high technical values, ‘Theri’ is carrying a lot of expectations not just in Tamil Nadu but in Andhra Pradesh and Telangana as well. The success of the film’s trailer and teaser in these two states is a testament to the buzz around the film.

“Vijay is in great form with hits like Thupaki and Atlee has already made a name for himself with Raja Rani. I am confident that the film will do very well here. Sri Venkateswara Creations and Kalaipuli Thanu will be releasing the Telugu version of the film”, said Dil Raju.