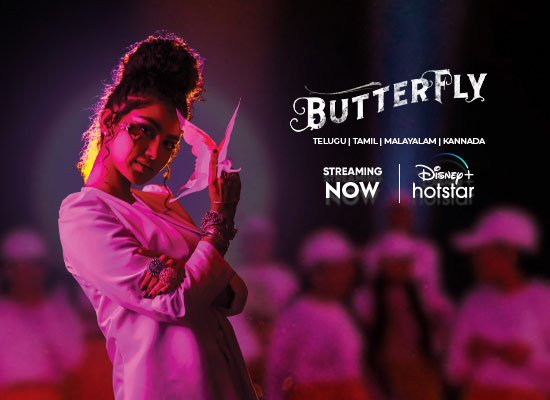 Disney Plus is creating a buzz with a new entertainer, “Butterfly”. The show takes place in a city, where the high-rise apartments and not so tight-knit communities create a unique and detached environment for the characters to navigate.

In a place where people hardly have time to stop and greet each other, a place where the secrets are trapped in the four walls, and where everyone is racing against time, can the kids be freed?

It is a gripping tale about the kidnapping of two children in a concrete jungle where no one is quite who they seem. As the story unfolds, secrets are uncovered and the true motives of the kidnappers are revealed. “Butterfly” promises to be a thrilling and suspenseful watch for audiences.

Anupama Parameswaran, known for her charming smile and captivating gaze, stars as “Geetha” in Disney Plus Hotstar’s new film. The film, which is captivating audiences with its engaging content, features Parameswaran in the lead role.

The talented actress, who has won over the hearts of Telugu audiences with her performances, is sure to deliver a memorable and enjoyable performance in this film.

Throughout the film, Geetha faces numerous challenges and experiences that test her determination and resourcefulness. As she fights to rescue the children, the story reaches a level of depth and complexity that sets it apart from other films.

How many adventures can Geeta go on for Chinnu and Bannu? How far can she go to free the children? Can she succeed in her attempts? To know the answers to these questions, watch “Butterfly” now streaming on Disney Plus Hotstar.

CLICK HERE!!  to Watch “BUTTERFLY” Movie Only On “Disney Plus HotStar”